The ESR and EuroSafe Imaging are proud to announce the publication of the European Guidelines on Diagnostic Reference Levels for Paediatric Imaging in the European Commission’s Radiation Protection Series.

These guidelines have been eagerly awaited by radiologists, radiographers, medical physicists, as well as national radiation protection regulators. They are expected to play an important role in paediatric imaging practice across Europe.

The guidelines were developed by the European Commission-funded project PiDRL (European Diagnostic Reference Levels for Paediatric Imaging), which was coordinated by the ESR and supported by key European stakeholders and professional groups working on radiation protection of paediatric patients, namely the European Society of Paediatric Radiology (ESPR), the European Federation of Radiographer Societies (EFRS), the European Federation of Organisations for Medical Physics (EFOMP), the Finnish Radiation and Nuclear Safety Authority (STUK) with Luxembourg Institute of Science and Technology (LIST) as subcontractor. PiDRL was led by Prof. John Damilakis, as scientific coordinator, and Prof. Peter Vock, as scientific co-coordinator.

The project was established in order to consolidate information currently existing on the diagnostic reference levels (DRLs) for medical exposure of paediatric patients. The importance of establishing such DRLs for high-dose medical examinations of patients, especially children who are more sensitive to radiation exposure, is high. Despite a large number of studies available from European countries, until now, European DRLs for paediatric patients were only available for a number of common radiological examinations.

In December 2013, recognising the need to enhance the radiation protection of children, the European Commission approved the 27-month tender project PiDRL to establish official European DRLs for paediatric patients.

The European Guidelines on Diagnostic Reference Levels for Paediatric Imaging represent the results of this project. For a more detailed background of the PiDRL project and what it has achieved, click here.

The European Guidelines on Diagnostic Reference Levels for Paediatric Imaging can be downloaded here. 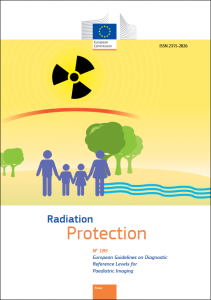